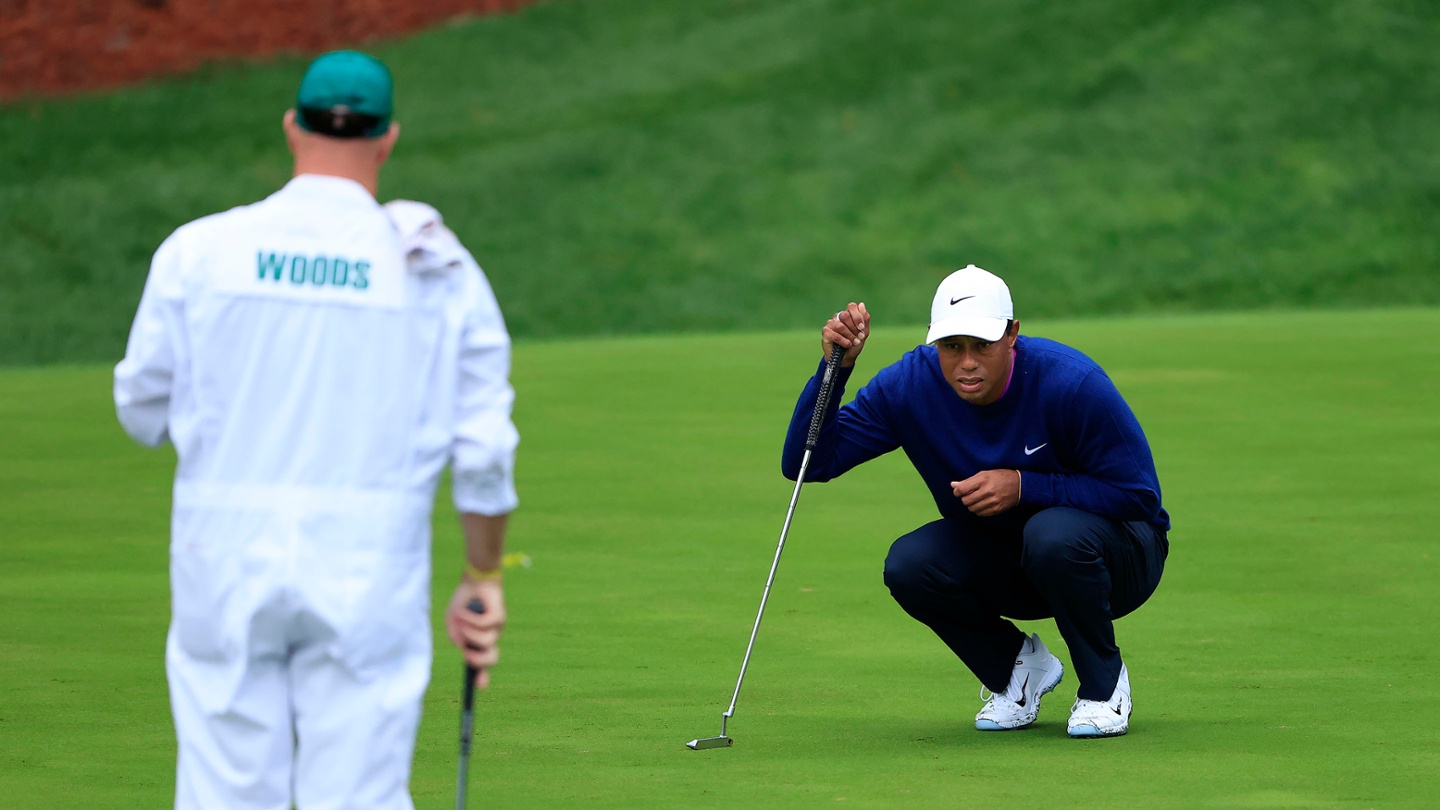 Tiger Woods had to play 26 holes on Saturday at The Masters.

Tiger Woods Shows Wear And Tear From A Long Day

Tiger Woods was up at 3:45 a.m. Saturday morning — it takes time to get his soon-to-be 44-year-old body ready for a long day on the course.

Woods went out and started with his second shot at the 11th hole early in the morning to finish his second round.  Tiger made par at the tough 11th but would only make a single birdie on the back nine at Augusta National and signed for a one-under par 71 for his second round.

“Eat fast, change clothes, get out after it,” was how Woods described what came next.

Woods played conservative golf and couldn’t make anything happen.  In fact, a bogey at the par five eighth put him over par for his first nine.  The second nine wasn’t much better — a bogey at 11 then birdies at 12 and 15 and all he could manage was an even-par 72.  That left him at five-under par, tied for 20th with five other players including Xander Schauffele, Webb Simpson and former Masters champ Danny Willett.

Woods began to look fatigued by mid-afternoon.  He was stretching his back and bending carefully to get his ball out of the hole on the greens.

The defending champion won’t be winning a sixth Green Jacket and victory No. 83 will have to wait.

He will be in the Butler Cabin Sunday afternoon to slip the Green Jacket on this year’s champion.

Rory McIlroy continued to climb out of the hole he created with that first-round 75.  After a 66 for round two, he shot 67 on Saturday.  He birdied eight, nine and 10 and looked ready to go really low but he fell apart on the par fives.  He bogeyed the 13th and could manage only a par at the 15th — potentially losing three shots.  Still, he is eight-under and might have been at 11-under if he found a way to open with a 72 on Thursday.

Phil Mickelson’s under-par run came to an end on Saturday.  After a nice start over the first 36-holes (69-70), Lefty fell back to earth on moving day and signed for a nasty seven-over par 79 that left him at two-over par and tied for 56th.  So much for the 47-inch driver experiment.

Brooks Koepka is looking better.  His 69 on Saturday got him to eight-under par, tied with McIlroy, Tommy Fleetwood and Hideki Matsuyama.  Hideki was a shot off the lead after 36-holes but could only manage an even-par 72 on moving day.

Dylan Fritelli, the South African who is in at 11-under par after a 67, played with Jordan Spieth at the University of Texas and lives in Austin.

Speaking of Jordan Spieth, he made the cut on the number at even par but his 73 on Saturday left him tied for 52nd.

Two amateurs survived the cut — 2019 U.S.  Amateur champ Andy Ogletree and runnerup John Augenstein.  They’ll be battling it out for low amateur on Sunday.  Ogletree starts with a two-shot lead.  He shot 73-70 playing alongside Tiger Woods the first 36 holes.  He shot 71 on Saturday and is two-under.  After rounds of 69-72, Augenstein shot 75 on Saturday and fell back to even par.