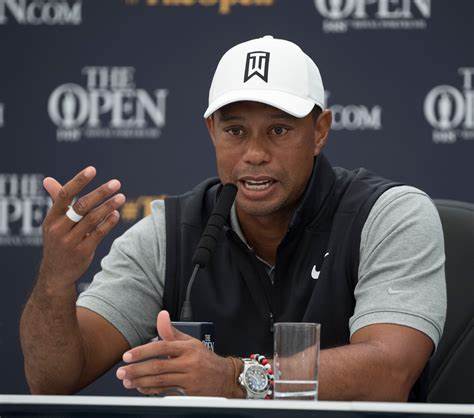 Tiger Woods spoke out loud and clear against the LIV on Tuesday.

Tiger Woods is the face of golf — he’s also the voice of the sport when he chooses to speak and on Tuesday at the 150th Open Championship, he slammed the door in the face of the LIV series and Greg Norman.

Tiger was strong in his convictions, honest and to the point and didn’t mince his words when asked for his thoughts on the renegade LIV series.

“As far as the players who have chosen to go to LIV and to play there, I disagree with it,” Woods said. “I think that what they’ve done is they’ve turned their back on what has allowed them to get to this position.”

Tiger agreed with the elimination of LIV boss Greg Norman from the champion festivities at this 150th celebration.  “Greg has done some things that I don’t think are in the best interests of our game.  I believe it’s the right thing (leaving Norman out of the celebration).”

Tiger also shunned the 54-hole LIV format.  “I just don’t see how, out of 54 holes — I can understand 54 holes is almost like a mandate when you get to the Senior Tour. The guys are a little bit older and a little more banged up. But when you’re at this young age and some of these kids — they really are kids who have gone from amateur golf into that organization — 72-hole tests are part of it,” Woods said. “We used to have 36-hole playoffs for major championships. That’s how it used to be — 18-hole U.S. Open playoffs.”

Tiger also drew a distinction from the 1968 split from the PGA of America and the creation of the PGA Tour.

“I understand what Jack and Arnold did (in leaving the PGA of America to found the PGA Tour) because playing professional golf at a Tour level versus a club pro is different, and I understand that transition and that move and the recognition that a touring pro versus a club pro is,” Woods said. “But what these players are doing for guaranteed money, what is the incentive to practice? What is the incentive to go out there and earn it in the dirt? You’re just getting paid a lot of money up front and playing a few events and playing 54 holes. They’re playing blaring music and have all these atmospheres that are different.”

Then Tiger threw out the world-ranking points issue:

“I just don’t see how that move is positive in the long term for a lot of these players, especially if the LIV organization doesn’t get world-ranking points and the major championships change their criteria for entering the events,” Woods said. “It would be sad to see some of these young kids never get a chance to experience it and experience what we’ve got a chance to experience and walk these hallowed grounds and play in these championships.”

When Tiger Woods talks, the world of golf listens.

You wonder if Greg Norman was listening?

The Wall Street Journal reported this week that the Department of Justice is investigating to determine if the PGA Tour engaged in anti-competitive practices regarding the LIV exhibition series.

The investigation points toward a polarizing question at the heart of the fight over professional golf’s future: Does the PGA Tour have the legal right to sanction players who compete on a rival circuit?  The Tour has long maintained that it does and has acted accordingly.