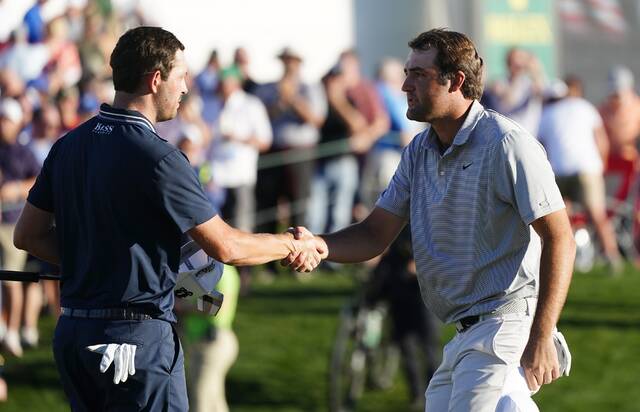 Could Cantlay and Scheffler both end up as No. 1 next week?

If you think the Official World Golf Rankings are a bit wacky, try this one on for size.

Apparently depending on how they finish, No. 2 Scottie Scheffler and No. 5 Patrick Cantlay could be tied for the No. 1 spot come late Sunday at the American Express championship.

This has never happened in the history of the world rankings but according to OWGR’s complex algorithm, if Cantlay wins and Scheffler finishes solo eighth, they will both pass current No. 1 Rory McIlroy and tie for the top spot.

What sounds particularly strange is that No. 3 Jon Rahm, who is in the field this week, does not have a path to No. 1 this week.

It all sounds a big far-fetched to say the least.

The Amex has a strong field this week with 10 if the world’s top 20 getting after it over three courses — LaQuinta Country Club, the Nicklaus Tournament course and the main venue — the Pete Dye Stadium course.

There is no defending champion — last year’s winner — Hudson Swafford — defected to the LIV series.

It’s time for the over-50 set to get back in action and this week the PGA Tour Champions starts its 2023 season at the Mitsubishi Electric.  Hualalai is the long-standing site for this season-opener.

Steve Alker heads the field as the Tour’s Player Of The Year for 2022.  Defending champion is Miguel-Angel Jimenez.

But the lead story this season is 65-year-old Bernhard Langer in hot pursuit of Hale Irwin’s seemingly unbreakable senior win record of 45 events.

Langer won his 44th last November at the TimberTech in Boca Raton so the 45-watch begins out in Hawaii.

Scott, who played last week at the Sony,  said this is a “critical” time of change in professional golf, and he fancies himself as one of 16 players on the committee capable of influencing the “big decisions” that will “map out the next decade and beyond” for the Tour.

During Sunday’s final-round broadcast at Waialae Country Club, NBC’s Dan Hicks brought up Scott’s new responsibility before turning the topic over to Paul Azinger in the booth.

“I was on that PAC for 13 years,” Azinger began. “I thought it was a colossal waste of time. But you think you’re achieving things, but…”