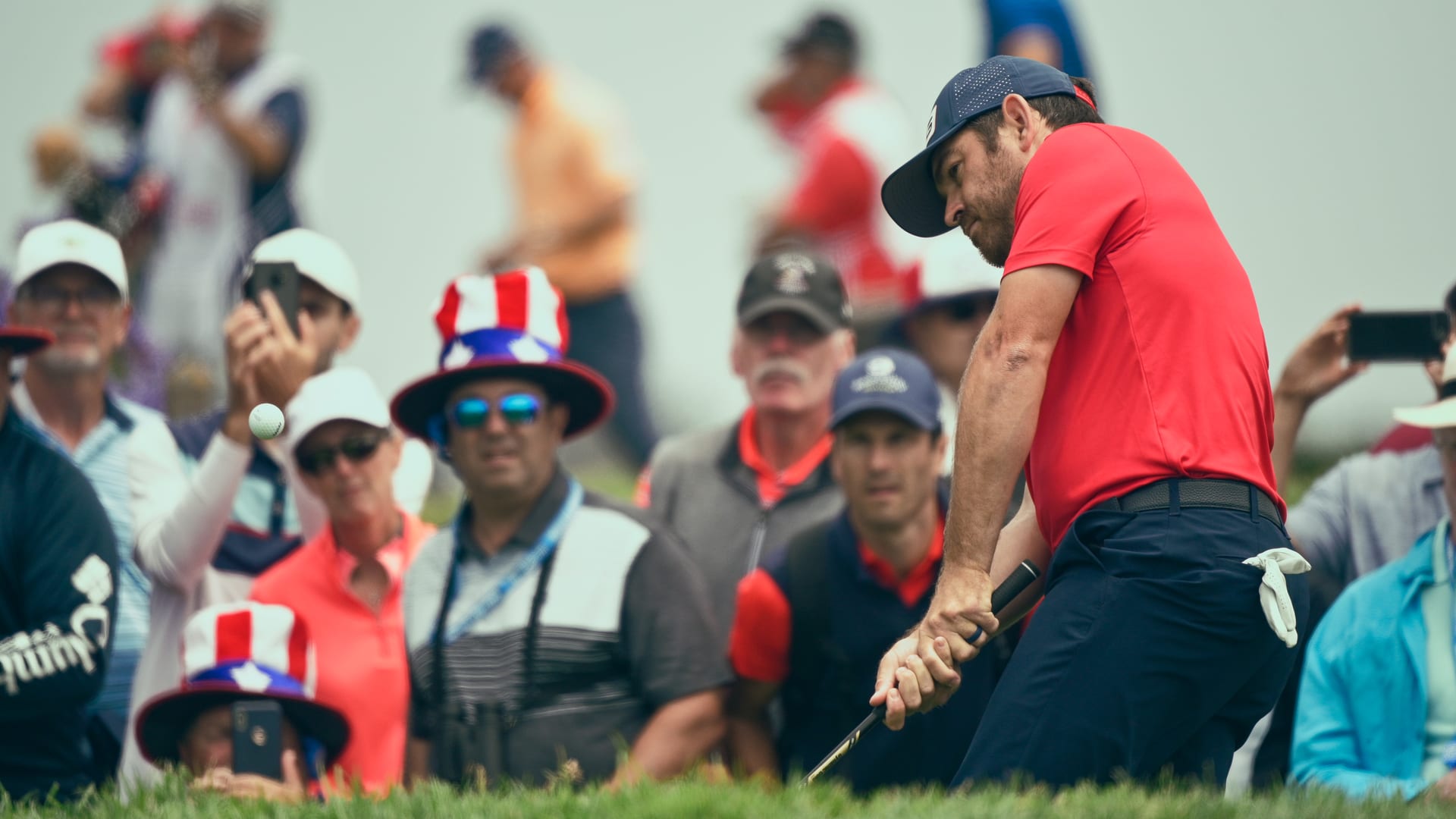 Louie Oosthuizen eagled the 18th late Saturday to grab a share of the 54-hole lead.

After three rounds of good and bad over the demanding South Course at Torrey Pines, this 121st U.S. Open has become the U.S. “Wide” Open.

Sunday’s showdown will have no less than twenty players in the mix in this hunt for the third major of the season and it promises to be intriguing.

Three are tied at the top at five-under par:  2010 Open champion Louie Oosthuizen, Canadian Mackenzie Huges, misser of the cut in his last five events prior to this and steadfast Russell Henley, a three-time Tour winner who hasn’t won since 2017.

Behind them are huge name players.  Defending champion Bryson DeChambeau’s 68 on Saturday got him to three-under and he knows he left a bunch of birdies out on the course.  Same for Rory McIlroy, the 2011 U.S. Open champion, winner of four majors and the man who turned in the day’s best round on moving day — a four-under par 67 that put him at three-under with Bryson.

Pre-tournament favorite Jon Rahm sits at two-under par after a one-over par 72.  Rahm totally shot himself in the foot on the par four 14th where a double-bogey six proved very costly and prevented him from entering the final 18 within a shot of the leaders.  Instead, he starts three back and will have to play much better than he did during his third round if he expects to win his first major.

Rahm was tied at two-under with Scottie Scheffler, who’s trying to make this major his first win while revitalized Matt Wolff hurt himself with two late bogeys (14 and 17) and dropped from four-under back into the trio at minus-two.

There are solid names at one-under par but any one of the five tied at that number know they need a low round to have any hope on Sunday.

There are another seven players sitting five back of the lead trio including two-time U.S. Open champion Brooks Koepka, who birdied only one of the the three par fives during his third round and didn’t look nearly as sharp as he needed to.  Paul Casey tied McIlroy for the day’s low round (67) and is in that seven-some as is Justin Thomas and 2018 Open champion at Carnoustie — Francesco Molinari.

If you had to guess a winning number come late Sunday, it could be that seven-under par is a target score, meaning those at even-par will have to shoot a number unseen this week at Torrey Pines.

One player who was tied at the top after 36 holes, put his major championship dreams to an end with a Saturday struggle.  Richard Bland, the 48-year-old European tour journeyman, stepped out of the limelight with a 77 that dropped him all the way back to plus-one.

At the end of the day, 20 players have a shot at the championship going into the final 18.

Some have a better chance than others, especially those within three of the leaders.

But these championships are played on grass — most are won, some are lost.