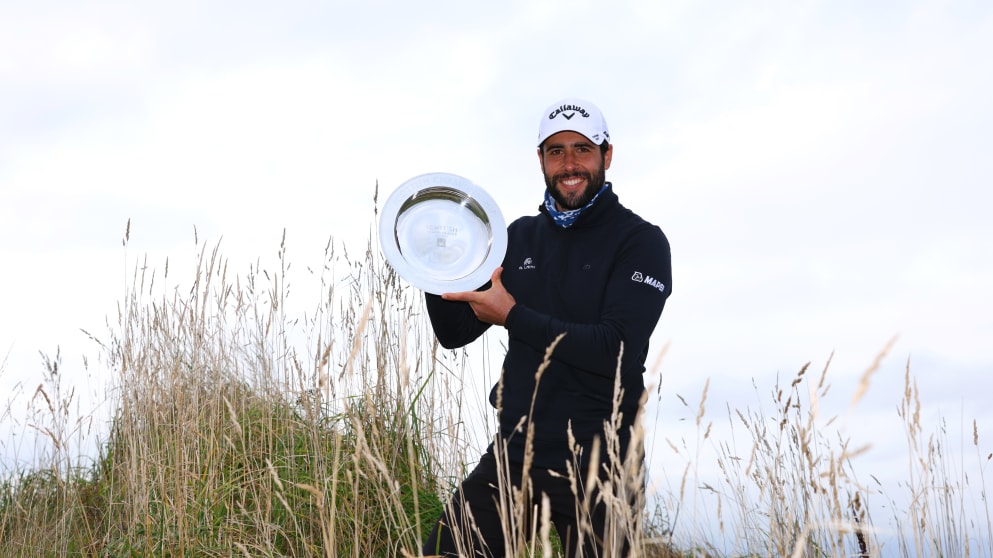 Adrian Otaegui's win was his first in a medal play championship.

Adrian Otaegui knew how to start the Scottish Championship in style last Thursday and on Sunday he created another incredible round — a closing 63 at the Fairmont St. Andrews Links.

His nine-under par closing effort gave him a 23-under par total for the championship, four shots better than 54-hole leader Matt Wallace.

Wallace bogeyed the first hole of the day right out of the box and it was a preview of what was to come for him.  He struggled with the driver and after finishing 18-under through the first three rounds, all he could manage over the final 18 was a one-under par 71 that left him runner-up to the popular Spaniard.

For Otaegui, it was his third European Tour win, but his first in a medal play event.  He left no doubt as he went out and put up five front-nine birdies that propelled him to the title.  He started the week with an incredible 10-under par 62 and all that kept him from finishing with another was a bogey at the 10th.  In between the opening 62 and the closing 63 were a pair of 70s.

“Stroke play is my favorite way of golf, I think it’s the proper way,” said Otaegui, who began the final round four shots behind Wallace.  “You have to play very solidly and very consistently all four rounds, which I think I did. I’m very happy to be able to win stroke play as well, my third win on the European Tour.  I had no expectations this morning, really. I just wanted to go out there, play well and shoot as well as possible. I mean, If you told me I was going to shoot 63 this morning, I wouldn’t believe it. Everything went well, I played very well, I felt very well, I was very focused and I holed some good putts. It’s been a very good week and especially today was a very good day to finish that week.”

Otaegui joined Seve Ballesteros and Rafa Cabrera-Bello as the only three Spanish players to win in Scotland.  “I feel so happy. To be able to win in Scotland, especially here in St Andrews, the home of golf, it means a lot to me,” Otaegui said, all smiles in the winner’s circle.  “I obviously have long term goals but I think those goals are here to make you practice better, practice harder and once you are at a tournament you just have to focus on the present. My dream has always been to win the Ryder Cup, to win majors, but right now I’m just focused on the end of the season.”

After Wallace, Aaron Rai finished solo third, continuing his string of great play.  He shot 66 to finish at 17-under par.  Garrick Porteous (71) and Chris Paisley (68), finished tied for fourth at 16-under, making four Brits coming in behind the Spaniard.