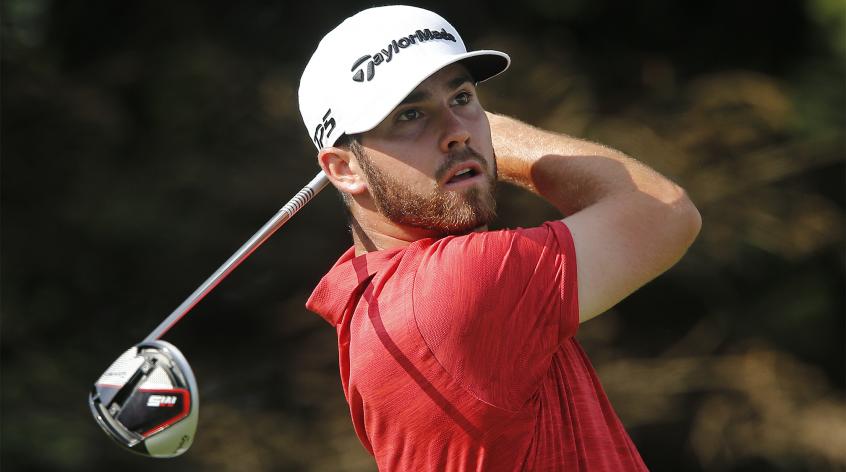 Matt Wolff holed a 26-foot eagle putt at the 72nd hole for victory.

Youth Served — Matt Wolff Goes Up, Out And In For 3M Win

Matt Wolff’s wild-looking golf swing goes up, then out, then in.

Oh yes, and the kid with the wild-looking swing is just 20 years old and as of late Sunday afternoon outside Minneapolis, he became the second-youngest winner of a PGA Tour event.

The former Oklahoma State Cowboy golfer who turned pro after the U.S. Open, earned himself a PGA Tour card with a marvelous 26-foot eagle putt at the 72nd hole at the TPC Twin Cities that left veteran Bryson DeChambeau in stunned disbelief.

Wolff holed that putt to edge DeChambeau and playing partner Collin Morikawa, another youngster who just turned pro and earned special tour status with his tie for second with DeChambeau.

The winning putt gave Wolff a back-nine 31 and a 65 that got him to 21-under par, a shot in front of Morikawa and DeChambeau.

The back nine was a ball-striking duel between the two youngsters with DeChambeau trying desperately to catch them.  After a yawner of an even par front nine, DeChambeau came to life with three birdies and a sensational eagle of his own at 18 after he hit his second to six-and-a-half feet.

DeChambeau signed his scorecard and was heading for the range, anticipating a playoff when he heard the huge roar from 18.  “What? He made it?” DeChambeau asked.   He then shook his head and headed off.

Wolff had to hold his breath as Morikawa’s eagle putt from 22 feet broke off at the hole.

“This week I really believed in myself,” said Wolff, who was playing in just his third event thanks to a sponsor exemption.  He played a near-perfect round with just a single bogey.  He showed no sign of nerves considering the circumstances.

But over that final putt, he was feeling it.

“I was shaking, to be honest,” Wolff said. “A lot of my putts weren’t going in today, and I was just kind of telling myself one’s bound to drop in. It happened at the right time. Just gave it a chance and it went over the right spot that I pointed out. And as soon as it dropped, the tears started coming. It’s a really special feeling.”

“I’ve changed forever, I guess,” Wolff said. “It’s crazy how the game of golf works, but I love it.”