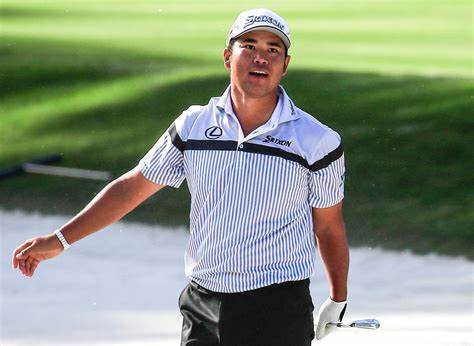 With millions of eyes on him, Hideki Matsuyama opened with a 64.

The posh and private Accordia Golf Narashino Country Club was absolutely perfect on day one of the Zozo Championship — it was tough and challenging and polite applause was running rampant as Hideki Matsuyama drew the largest gallery and he didn’t disappoint his countrymen and women.

The Masters champion put himself right in the thick of things with a six-under par 64 — it should have been 63 had he not three-putted for par at the closing par five 18th.  From 60 feet he left himself a four-footer to tie Hirochi Iwata at seven-under for the first round Thursday.

That left Matsuyama disappointed, no doubt but he could take comfort from a bogey-free round where his ball striking was spot-on, his putting nice with the exception of that last one.  He beat playing partner Xander Schauffele by six shots and crushed Olympic Bronze Medalist and fellow playing partner C.T. Pan by a whopping 12 shots.  Pan had all sorts of issues on his way to a 76 that left him tied for dead-last with Doc Redman in the 78-player field.

The weather was outstanding — not a hint of wind, mild temperatures and good crowds there outside Chiba, unlike the sauna during the Summer Olympics outside Tokyo.  The Japanese culture is so very polite and the crowds are a complete opposite of what you get at your standard PGA Tour event — no screaming, no shouting, no “GET IN THE HOLE!” — no none of that, enthusiastic applause for good shots, gasps and groans for bad shots or missed putts as if they were the ones playing.

Schauffele and fellow Americans Rickie Fowler and Collin Morikawa were the secondary draws, taking a back seat to Hideki, who owns national hero status in his country thanks to that Masters victory last April.

Rickie and Xander shot 70s — even par, Collin struggled most of his round but managed to get in the house with 71 that left him tied for 42nd.

After his round, Rickie joined the broadcast team and these were a few of his observations:

“I like my start, hated the 17th — ran out of gas.  I thought I was gonna be better today than I was, kinda hit a wall on the back nine,” Fowler said of his battle with some jet lag.

“The 17th set me back, it was my eighth hole of the day,” Fowler explained.  He made triple-bogey seven on that par four, thanks to an out-of-position wayward drive that sailed right and hit a cart path and left him struggling.”  Rickie chuckled as he referred to it as “my hiccup.”

On the course condition:  “The golf course is great, it’s a very fair test.  The greens have a lot of movement, you can’t see it on television.  If you get above the hole, you have to be careful.”

With the exception of the 17th, Fowler’s good play from the CJ Cup appeared to carry over to this week.  Rickie added that he was boosted by “a kinda stamp of approval” from his former coach Butch Harmon.  He visited with Harmon in Las Vegas.  Fowler described his slump:  “It’s been a long road of not so good golf.”

Schauffele scrambled most of his round — wayward drives, loose shots made it a tough start for Xander, who still managed to put an even par round on his card.

As far as the leaderboard, Joaquin Niemann was tied with Matsuyama at six-under, England’s Matt Wallace shot 65 and Brendan Steele was low American with a four-under par 66.